What is RIDDOR? The following is a summary of The United Kingdom Statute Reporting of Injuries, Diseases and Dangerous Occurrences Regulations or RIDDOR. It is not a definitive guide and should not be used as such.  For full information see article references at the bottom of this page.

The Reporting of Injuries, Diseases and Dangerous Occurrences Regulations or RIDDOR is a law in the United Kingdom revised in 2013 that requires employers, and other people in charge of work premises, to report and keep records of work-related accidents, diseases and dangerous occurrences of certain types.

There is not a requirement to keep a record of all work related accidents, diseases or dangerous occurrences (referred to as ‘incidents’ in this article). RIDDOR requires a ‘responsible’ person in the work environment to report accidents.  Responsible persons include an employer, the self employed or people in control of a work premise. There are a number of special cases that are dealt with separately which include gas suppliers and engineers, people working offshore and people in mines, quarries, pipelines and wells. For more information on these special cases see articles reference below.

The certain types of reportable incidents are as follows:

Occupational diseases include (but are not limited to) the following:

Distributors, fillers, importers & suppliers of flammable gas must report  incidents where someone has died, lost consciousness, or been taken to hospital for treatment to an injury arising in connection with that gas. Such incidents should be reported.

In addition, registered gas engineers must provide details of gas appliances they believe are dangerous enough to cause an accident or incident.

What records need to be kept? 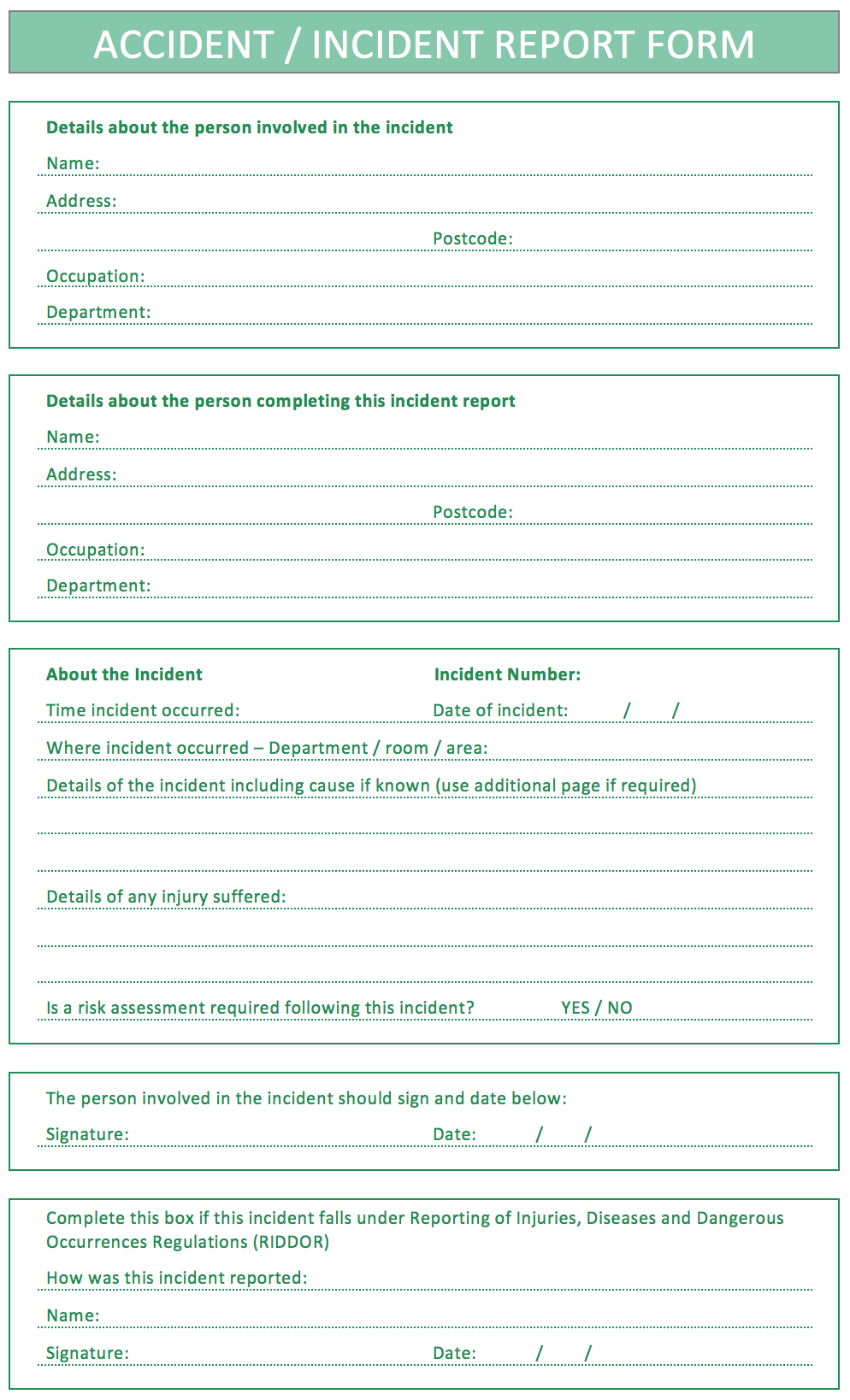 All records of reportable injury, over-three day injury, disease or dangerous occurrence must be kept and reported using one of the standard online RIDDOR forms. The list of online forms is available through HSE How to make a RIDDOR report.

It is also good practice to keep your own record of incidents.  This usually undertaken by recording incidents in an incident book. However, an incident book is not a particularly helpful medium when it comes to incident analysis. In addition to capturing the details of the incident in an incident book (this could be an online document) it is useful to capture the number of incidents in a system to build a picture of an organisations health and safety record over time. This becomes particularly important if the industry requires the demonstration of good health and safety practice.

An example of a typical accident / incident report form can be seen to the left and downloaded here: Accident/Incident Report Form

A system like Scoreboard can provide everything required to not only record and manage specific incidents, but also to record incidents over time and to allow future analysis of the data. To make life easier for anyone looking to implement this type of system, Scoreboard has a RIDDOR template option: The RIDDOR Scorecard

End What is RIDDOR?

This website uses cookies to improve your experience while you navigate through the website. Out of these, the cookies that are categorized as necessary are stored on your browser as they are essential for the working of basic functionalities of the website. We also use third-party cookies that help us analyze and understand how you use this website. These cookies will be stored in your browser only with your consent. You also have the option to opt-out of these cookies. But opting out of some of these cookies may affect your browsing experience.
Necessary Always Enabled

Any cookies that may not be particularly necessary for the website to function and is used specifically to collect user personal data via analytics, ads, other embedded contents are termed as non-necessary cookies. It is mandatory to procure user consent prior to running these cookies on your website.